July 08, 2020
The Amorites swept through Syria and held the region in a dark age longer than any other part of Mesopotamia. But when the dust finally does settle, we will see a number of nations ruled by barbarians, but behaving in quite civilized fashions. Today we will look at the establishment of Yamhad, Qatna, and Mari as well as the early kings of Assyria, getting a feel for the new players that will be with us for the next few hundred years. In the second half of the show, we enter briefly into the Age of Biblical Patriarchs and events of the Book of Genesis, though this is more of an interesting tangent than a major part of the historical narrative at this point.

A general map of Hurrian settlements is below, taken from the partially complete but interesting website on the Hurrian city of Urkesh. 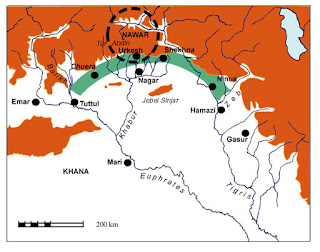 Also, for my own reference I put together a few dates of when places were active, this might help someone else, but don't take it as gospel: