April 21, 2020
The Babylonian creation myth, Enuma Elish, tells the story of the creation of the world and how it was a terrible mistake immediately regretted by its parents. Said parents then attempt a late-term abortion, but the young gods, led by Ea and Marduk, fight a war. Since the universe obviously still exists, you can already guess who wins. In this tale, we learn that Marduk is awesome. Like seriously, totally awesome.

I didn't make it very clear in this story, because it is one of the most perplexing parts of the myth, all the partying and warfare happens within Tiamat's belly, like a pregnant mother. There is a whole world in Tiamat's womb, but also Tiamat herself acts as a character in that world, inside her own womb. It is all quite confused and what exactly the Ammorites meant by it all is unclear to me, so I simply omitted it.

The name Enuma Elish is apparently what the Akkadians would call the story, since it seems they had a habit of titleing works based on the incipit, which is just a fancy latin word for saying they named things based off the first few words of the story. So Enuma Elish means When on high.

Also, as mentioned, the Enuma Elish was a critical part of the Babylonian Akitu festival, the new year and harvest festival. Here is a little link to the festival.

Also, it is important to note that while this is an important story in Mesopotamian culture, it is far from the only creation myth. It almost seems as if each city had their own, and we already saw a number of different accounts of the early days of the world in previous episodes, and we still have a few more creation myths to go when we get to the end of the middle bronze age period.

Oh my goodness, I read the name of the enemy general as Qingu the entire episode, but it is actually Qingdu. I almost want to re-record the whole thing, but that is a lot of work for one error, so I will leave it as a momunment to my ineptitude. 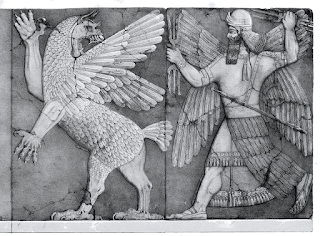