Today the Akkadian empire will collapse, brought low by climate change, foreign invasion, and civil war. A dark age of Gutian domination will descend upon Mesopotamia. This episode will cover the fall, the gutian dynasty, and even a bit the cities that did survive the Gutians, mostly Lagash.

I don't think I can emphasize enough the degree to which this is a dark age. With the birth of writing things got gradually more detailed, and it is frustrating for me to have to basically skip over a century because the stupid gutians were to barbaric and uncivilized to write anything down. I will be happy when they are finally eliminated from history.

There is an open question of how long Gutians were dominant over Mesopotamia. The easy answer is that the Akkadian empire basically fell with the death of Shar-Kali-Sharri in 2193 and the next major dynasty arose with the rebellion of Utu-Hengal in 2050. But from the sources, we have numbers as high as 125 years of Gutian domination and as low as about 40.

Gah! I misspoke and didn't catch it. Yu the great in China was obviously 2200 BCE, not 2400 BCE, since he is supposed to have coincided with the climate shift. Sorry.

I feel kind of bad for poor Gudea of Lagash. Honestly, he is a pretty significant fellow for later historians thanks to being a wealth of information in this dark period, but the fact is I really didn't have anywhere to fit him into the show. He doesn't have any particular stories, and most of his accomplishments emerge out of obscurity and get rendered meaningless in the obscurity that follows. And there isn't anything in his voice either, like the letters that are about to start emerging soon. All we have are the statues of him, so here you go. 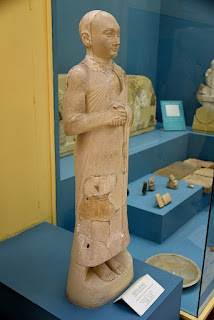