February 04, 2020
What did Akkadian power look like on the ground, and what did daily life look like for the average Sumerian during this period? Today I will use the occasion of the rise of the Akkadian Empire to pause and look at the human condition below that of gods and kings, since there are now enough sources to put together that we can at least sketch these things for the first time in human history. Not much story this week, just discussion of how things were. We will return to the story of the grand sweep of the empire next week.

Where was Akkad? No one even knows. But in the map below, it is almost certainly somewhere in a box between modern Baghdad and ancient Kish, on either the Tigris or Euphrates rivers. That location was strategically critical since it meant Sargon could easily send men down either river, downstream being easier than upstream, with commands or weapons at relatively short notice. This in addition to his road network puts him in a strong central location for governing the empire. That said, this is not the most wealthy or densely settled region in Mesopotamia, and it would always rely on being the center of an empire for the wealth it would acquire. Which is why when the Akkadian empire fell and the city was sacked, it was never economically feasible to rebuild and the location was lost to time. The city would enjoy a brief renaissance in the Iron age when the Assyrians, who worshiped the legend of Sargon and his empire, would rebuild the cult centers of the city, but this project too would eventually collapse and be forgotten in time. 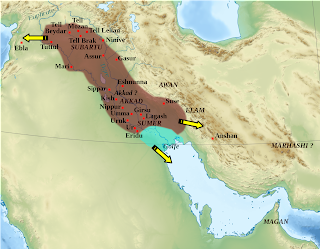 Most of my stories work off translations of primary sources, typically found over at etcsl and supplemented with various secondary materials. Today, though, nearly all of my information is summarized from the excellent book Age of Agade, by Benjamin R. Foster, possibly the only comprehensive and accessible resource of the Akkadian period. So a big Thank You to Mr. Foster is in order for his tremendous effort in making this look into Akkadian daily life possible.