January 28, 2020
Today we look at the rise of the world's first empire, following the story of Sargon of Akkad's rise from the son of a gardener to the king of Sumer and Akkad. His rise and empire is bigger than can be fit into a single episode, but the Legend of Sargon's rise to power should be enough to whet your appetite for the coming Akkadian series.


His rise to power has a lot of uncertainty. One note during the initial war against Lugalzagesi, some think that Lugalzagesi actually conquered Kish with Sargon's help, but that Sargon revolted and conquered Uruk, then the two armies marched and met in battle. I can almost sort of see where this idea comes from, but as far as I can tell it involves pretty heavy interpretation of very fragmentary texts, and while it would make a nice story, I think it is too complicated and unlikely to consider the best interpretation of events. I am not saying it didn't happen like this, it could well have, and would make for an even better story, just that I don't think the evidence justifies quite such a complex narrative. In the absense of detail, I am selecting the more straightforward possibility.

A fun extra detail, the triumph at Nippur would have been a huge spectacle, and the center of the show seems to have been a long, long line of naked prisoners, from random POWs to nobles and as mentioned Lugalzagesi himself. It is unclear what the fate of most of them were. Almost certainly Lugalzagesi was killed, as we can see in this image Sargon personally bonking him on the head, but the less important you were, the more likely you would have been sold into slavery. Honestly, given the times, it could well have been a mass execution, it could also have been a massive slave auction, and it could have been a mix of the two and no one would have raised too much fuss about it. It is interesting how much detail the historians pull from artistic depictions like this one, especially given the sometimes poor quality of preservation. 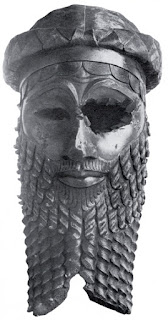