January 14, 2020
War; war never changes. Forty five hundred years ago the men of Lagash made war against the city of Umma over water rights, the very first battle for which we have recorded details. This episode begins the history of the city of Lagash and looks at the rough reality of ancient battle.

So, I dun goofed. There were many battles and campaigns between Lagash and Umma over about 150 years, and in this episode I mistakenly conflated a campaign fought by king Eannatum with a campaign fought by the subsequent king Enannatum. The specifics of the battle of Black Dog Hill are from the later Enannatum tablet and speak of his victory there, and while other of the details here are from the first campaign recorded in the Stele of Vultures. Honestly, the course of the two campaigns, and indeed most Sumerian military actions of the early dynastic period, followed a pretty similar flow. March out, have a battle, attack the now defenseless city, return with plunder, or be defeated in the battle and go home sad.

A lot of the details from this battle are extrapolated from what I have read about ancient warfare in general, not details present in the account of this battle. Like most ancient battle records, the Battle of Black Dog Hill is fairly dry and largely silent on the nitty-gritty experience of the actual soldier, just mentions of particular battle deeds and the overall outcome. But mixing together a lot of secondary sources, you can get a pretty grim idea of ancient battle. Shout out here particularly to Victor Davis Hanson, who whatever you think about his political stuff has some excellent books about classical greek history, if you want to read more about ancient warfare. He is an educated enthusiast, not an academic, and so he comes at it from a very different eye then most sources do, one I think that is more relatable than most.

I did mention a whole lot of locations this episode, so here is a little map of Lagash and the surrounding cities from around this period. 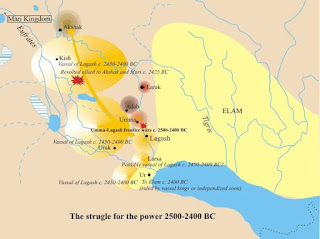 Also, for your enjoyment, here is a wider regional map of the early period.

I am enjoying doing these historical stories, so expect a good long series of them for a while, at least until we get deep into the Akkadian empire, then I will take a break and look at Akkadian literature, myth, and daily life.

Also, some of these kings that have uncertain rises to power and uncertain deaths, my own personal guess is that court intrigue is involved. Maybe I have been listening too much to the History of China podcast, but I cen't help but suspect that there would be long, exciting stories behind each of those ambiguous lines, if only the story had been written down and survived to this day.