December 31, 2019
The mountains will crumble and cities will tremble as Ninurta comes to put down a rebellion with maximum casualties and no geneva convention. Then he will teach us geology. The Sumerians are a funny bunch, which is why their four thousand year old stories still have the capacity to surprise us. Online at oldeststories.net. 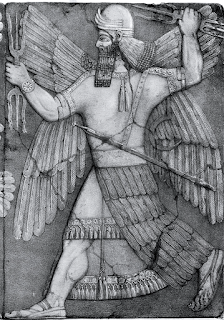 The Lugal-e is a bit confused in places, with different translations giving very different interpretations. I have, as usual, mixed and matched between versions to produce what I think is the most interesting version, but a lot of the action is simply hard to follow in the original. This is in part because Cunieform has a remarkable economy to it, using very few words to express an idea, which creates ambiguity if you don't have all the context, and add to that the fact that so much of the work is damaged and hard to read. In any case, I am pretty sure the listing of the rocks is the important part of the story, and that survived pretty well.

We will definitely be getting more Ninurta stories as time goes by, simply because he is so popular of a god among later generations. Still, I wanted to include him in our look at the Anunnaki because, again, he is very popular and shows up a bunch, so I figured he deserved an introduction.

I will do a fuller show on Sumerian education, because it really is fascinating, but for now let me show you a small example of a student's tablet. This student was writing the name of the god Urash over and over again, the NY Met has about a dozen repetitions like the one below. 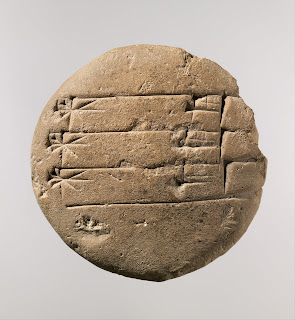