December 10, 2019
This week we will read the actual mail of a real person from 2100BCE and hear his actual words as he manages his empire. King Shulgi of Ur is our hero, but we will also hear from other characters like his commander Aradgu and his father Ur-Nammu.

I found a little reference map for you of the Ur III period. Sadly, basically none of the places mentioned here are on any map I have been able to find 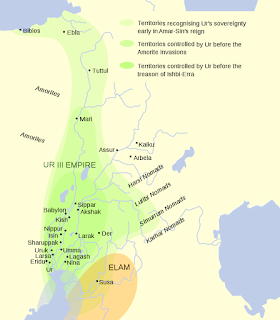 I should say that Ur-nammu is the oldest surviving law code, but the oldest law code we know of at all was written a few hundred years before by a fellow named Urukagina. We don't have the code surviving, but we do have some neat little bits about him which I am looking into, and if there is enough there I might make an episode about him.

There are many more letters, including a natural sequel to this episode following Shulgi's grandson Ibbi-suen while the empire falls apart around him. Is anyone interested in that?

Other sources of daily life include reciepts for loans, purchases, manufacturing, and disputes. But these are harder to fit into a story, would anyone be interested in these?

I will be returning to narratives of gods and kings soon, but I just wanted to see how these episodes come together as well.