November 20, 2019
Today we conclude the epic of Gilgamesh, finally we learn the story behind the mysterious hermit Utnapishtim and go on an adventure to seek immortality. I did just last episode say we were going on a once per week schedule, but I wanted to get the epic finished, so bonus episode. Weekly podcasts will start next Wednesday.


Sort of a post script to the episode and to the Epic itself, but Gilgamesh does have some adventures even after this one, though sadly we know of them only as oblique mentions. Most notably, the tale of Gilgamesh, Enkidu, and the Underworld from episode 5 is traditionally listed as a twelfth tablet, even though it doesn't really fit anywhere in the normal continuity. But most interestingly, after Gilgamesh eventually dies, since he never does obtain immortality, he takes on a role in the afterlife as a judge of souls, rather like Anubis or St. Peter at the heavenly gates. A thematically interesting role for someone so obsessed with immortal fame and mortality itself.

Have I posted yet what these clay tablets containing the oldest stories look like? Well this is one of the Atrahasis tablets that form a supplement to today's story, note the terrible condition, but also wonder at the fact that it has survived so long. 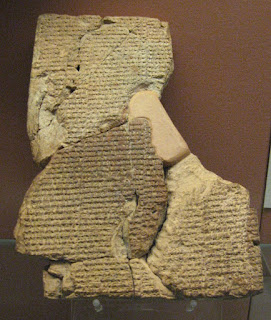 If we are lucky we have two or three in similar condition to compare to build the story around, but often we are working with a much more fragmented text with only a single copy. I don't do any of the archeology or translation, but even translated putting the fragments together and interpolating a story is a fun puzzle.

Today's story was the great flood narrative, and draws on the story in the epic itself, which calls the hero Utnapishtim, but also on equivalent texts about a man called Atrahasis, or in another fragment Zi-ud-sura. And of course, it is also the story Noah's Ark is based off of, though I find it to be a more compelling tale than the biblical account. I should mention at some point that over the centuries pretty much all these characters have multiple names, and I am pretty much just picking the ones I like best.