October 30, 2019
In this episode we continue the narrative where we left off last time. The city of Aratta is again growing rebellious, and so King Enmerkar assembles an implausibly large army to put them down once and for all. Of his eight divine generals, we only even know the name of one, but his adventures prove dramatic enough to satisfy. The website and the podcast are all working on the technical side, at least at the current moment, so click here to listen.


As always, I welcome any comments or criticism down below. I am still getting started, so hopefully the quality will improve from here on out.

Last episode's page has a nice little map of the relevant region, though as I read more I am more inclined to suspect the town of Aratta is even further south than the massive unknown spot on that map, not that I am any sort of historian.

Also, I found it interesting to note which numbers seemed plausible, like the fact that the army took seven days to reach the mountains, not bathing until day six, as well as the year long siege, but the number of soldiers in the army and the lengths of the reigns of these monarchs are both inflated to the point of absurdity. Why do they pick real numbers sometimes and made up numbers other times? Perhaps travel times were more directly in the realm of common experience, while the scribes, being paid by the king, had a vested interest in making the king seem more powerful and glorious than he really was? It seems like a plausible reason, but plausible doesn't always mean true. I suspect someone has written a doctoral dissertation on the topic of how and when numbers are inflated in Mesopotamian literature.

And speaking of plausible but maybe not true, I was unable to find an official explanation of Ishtar's parable at the end of the episode. The only place that even attempted to explain it said it was a magic ritual. I wasn't satisfied and so spent an embarrassing amount of time trying to puzzle it out. I have given my own answer to the riddle in this episode, and I think it makes for a good story, but I am being particularly free with poetic license at that point.

And finally, if anyone wishes they could be a comic book artist but wants someone to do the writing for them, I would genuinely love to collaborate on a Lugalbanda fan-fiction comic.

Edit: It looks like sticking a picture in the post makes the home page look cooler. So here is a pic from the wiki for the Fate series of Japanese games/shows/VNs, because apparently he shows up as a Rider in one of the sequels that I have never played. There is also a Lugalbanda in one of the Xenoblade chronicles, apparently, though it is just a generic monster and doesn't look nearly as awesome as this one does. 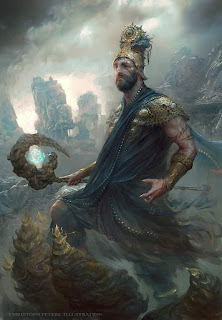