October 28, 2019
The first episode begins, properly enough, at the beginning, with a tale so old that it contains within it the invention of writing. Listen as I recount for you the tale of Enmerkar, second king of Uruk, as he provokes a war with the rival city of Aratta. Hopefully, this is the correct podcast link.   Also, it should show up in the feed on the side. Still working on the technical side of things.


Thanks to Wikipedia, we have a little map to give you an idea of where Uruk is and where Aratta might be. The actual location of the latter city has been lost to time, and I have seen lots of different options for where it could be.

Additionally, I mentioned a few other little historical tidbits that I wanted to make sure got mentioned, but didn't really have a spot to elaborate on historically. The image below, also thanks to Wikipedia, is the oldest known representation of the human face. The Mask of Warka represents a person named Warka, but also symbolically the goddess Inanna, or Ishtar, dated to around 3100 BCE, and thus even older than the story told in this episode. I also threw in the line older than the pyramids, because the oldest great constructions of Uruk predate the first egyptian pyramids by maybe 500 years (though the oldest egyptian dynasties go back way farther than the first pyramids) Again from our friend Wiki, a floor plan of one extensive temple complex: 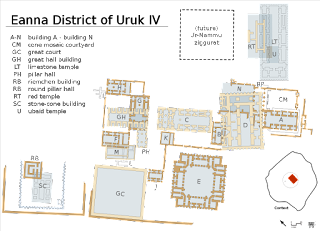 Anyway, I don't really know how many notes to put here. Leave a comment with your comments about the show, especially any technical issues or suggestions for improvements. Thanks for listening.